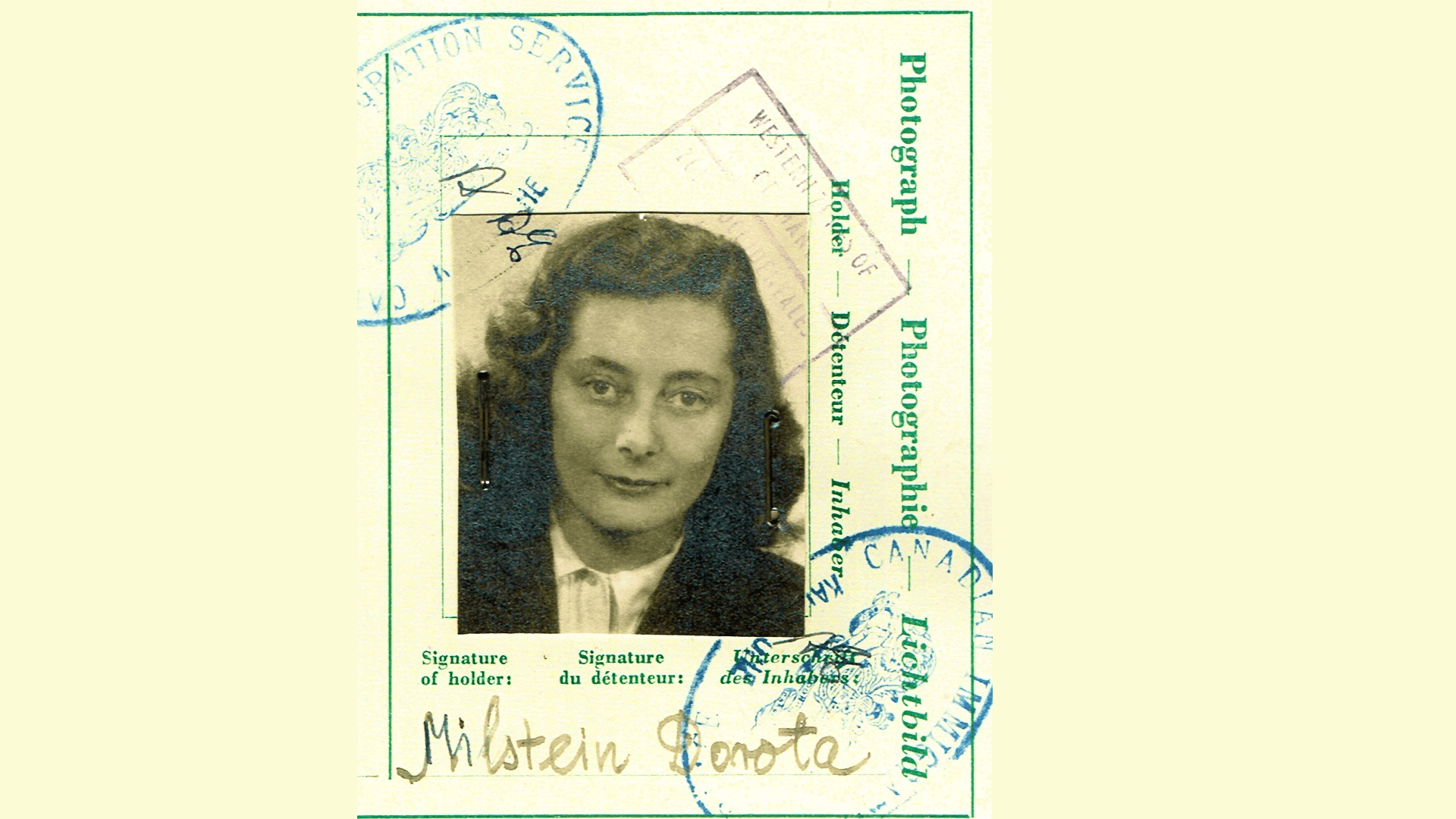 How My Mother’s Truth Set Me Free

As children, it doesn’t occur to us that our parents had lives before they were sending us off to school and tucking us in at night. So it was with my mother, a Holocaust survivor, whose life was full of horrors, grief, pluck and courage. And then silence. I discovered this late in life, and have written about it before. I think about my mother every day, and will never stop writing about her. Here’s more of what I have found out.

When I was a kid, visiting other Polski families was a time for games and hijinks, checking out new comic books and the latest Mad Magazine, doing makeup with pencil crayons, dressing up the pet guinea pig, and acting out comedy skits.  Some of us were less Polski, others more. But we were Canadian kids, and even though we were Catholic and prayed to Jesus in Polski, our silly fun was forged by where we were – in the present, not the past.

In fact, the past was verboten. Our parents didn’t talk about it. All of us had grown up in the long shadow of the second world war, and it hung over us like a dreadful balloon. Talking might burst the balloon, and we would be all drenched in a swill of swastikas, death’s heads, ghosts and blood. So you just didn’t go there.

Everyone’s Polski parents spoke with a melodic accent, asking us about our school and music lessons. And oh, the feasts! Delectable, mouth-watering rosoł (chicken soup) with dill, gołompki (cabbage rolls) with thick tomato sauce, juicy pierogi with melted butter and onions, tender veal kotlety (cutlets), and if I was lucky, szarlotka (apple cake) for dessert with whipped cream.  My belly bursting with good food and kindness, how could I ask, “and what exactly happened to you in the war?”

I already kind of knew. Most of the dads had been in a prisoner of war camp with my dad, and the moms had seen bombs fall and a few Nazis here and there. My own mother had “escaped” from the Nazis and spent part of the war in at the Hotel Schiffmeister in Germany. She had lost her parents, and hardly any of our Polski friends had grandparents, aunts or uncles.

When I was 12 years old, our family moved from Toronto to Oakville, a suburb of Toronto. Oakville was known as the richest town in Canada. It was certainly the whitest. The only accents were posh and British, Scottish burrs or Irish drawls. The monotony of the endless lawns and flat houses was stifling. Occasionally we would leave for the city, and my mother breathed a sigh of relief for “escaping” Oakville. It made me wonder, what had she really escaped during the war?

Then, when I was 34 years old, my parents separated. Their marriage had deteriorated to where they could barely stand to be in the same room together, so it wasn’t much of a surprise. But what shook me to my  core was a statement my mother made in an affidavit, where she stated she had been born into the Jewish faith. What in the blue blazes? My mother was Jewish? The heck?

Initially, my mother refused to say anything. She had sat on her pain for over 40 years. It had made her brittle, angry and fearful. I couldn’t let it fester any longer. Now, it was the truth that needed to escape.

Slowly, my mother spoke, often for moments, sometimes for hours. Although I knew her as Joanna, she had been born Dorota Milstein in Czestochowa in Poland, daughter to assimilated Polish jews, Maurycy Milstein and Bronislawa Dawidowicz. In the summer of 1939, Dorota was 21. War was brewing, so she caught the last civilian train from Warsaw to Lwów (now Lviv) to join her parents.

“On September 17, 1939, the USSR invaded and occupied Lwów. Life was suspended in a paralyzing military state.”

Then, on June 22, 1941, the Nazis marched into Lwów. All the Jews had to move into a ghetto. On November 15, 1941, Maurycy and Bronislawa were crossing under the Pełtawna bridge to enter the ghetto. They were caught in the brutal Nazi “Aktion under the bridge,” where the old and sick were taken away. Maurycy was apprehended by the Nazis, despite Bronislawa’s pleas. He was probably shot in the “Piaski,” the sand quarry behind the ghetto, where many Jews were murdered.

Dorota and Bronislawa were crowded into an apartment in the Lwów ghetto with other families. From their home at 23 Sommerstein (now Zamarstynovska), they could see Nazis kicking and flogging unfortunates to the Janowska camp, to their death by starvation, labour or bullets. Luckily my mother was able to find a job in the ghetto hospital. She was given lowly tasks, like bathing camp inmates, the bathwater teeming with lice.

After one too many Aktions, Bronislawa began accompanying Dorota to the hospital. On August 23, 1942, there was an Aktion in the hospital, with Nazis terrorizing and beating  workers with chains, whips and guns. When it was over, my grandmother has disappeared. She probably died in Belzec.

So Dorota was left all alone. I cannot bear to think of her trembling with grief, surrounded by misery, the moans of the sick and dying, the stench of bodies in the streets, every day another horror. What did she see? Sadism, cruelty and death. She continued to labour at the ghetto hospital until it was liquidated.

Dorota was then put to work in the Janowska camp, sewing slippers and sorting the clothes of dead Jews. At 5:00 am, my mother had to march from the ghetto to the camp, praying she would not be selected to be humiliated, tortured or shot. The “Tango of Death” orchestra played as Nazis brandished clubs and guns. Dorota was drained and numb by the time she came home to the barracks she shared with other women.  Sleeping on straw pallets, rest was interrupted by nightmares, lice and gunshots. She barely survived typhus.

At the end of May, 1943, Haupshturmführer Fritz Gebauer announced that the Lwów ghetto would be liquidated. On June 1, 1943, Dorota plucked a bouquet of wild irises with shaking fingers, and walked out the ghetto gates. She had false papers identifying her as Joanna Litniowska, a Polish Catholic. No one stopped her. She fled to Berchtesgaden, where she worked in the Hotel Schiffmeister as a kitchen maid. She was four kilometres from Hitler’s Eagle Nest. No one suspected she was Jewish.

After the war, Joanna Litniowska became Dorota Milstein again. She lived in a Displaced Persons camp in Munich, where she met my father, Andrew Lagowski. They came to Canada, my mother converted to Catholicism and became Joanna, and married Andrew.

How could the woman who tenderly nurtured me come out of this terror? How could anyone come out of that tragedy and allow another human being to touch them? Unlike my mother, I’m free to know that I am a Jew and to be proud of it. There is still anti-semitism, here, in Toronto 2021, as there is most everywhere. But this is not Nazi-occupied Europe. I am free to distinguish between real knowledge and paranoia. There are still those who hide their Judaism in the closet. Not me. I follow my conscience, not the crowd. The truth of Dorota/Joanna inspires me to claim my inheritance. This freedom, this truth, is my legacy and my privilege.

previous post
Now is the Time to Ask – Which Kugel Team are you On?
next post
From the Nanny to Tehran: On The Evolution of (Some) Jewish Fem Characters in TV and Film