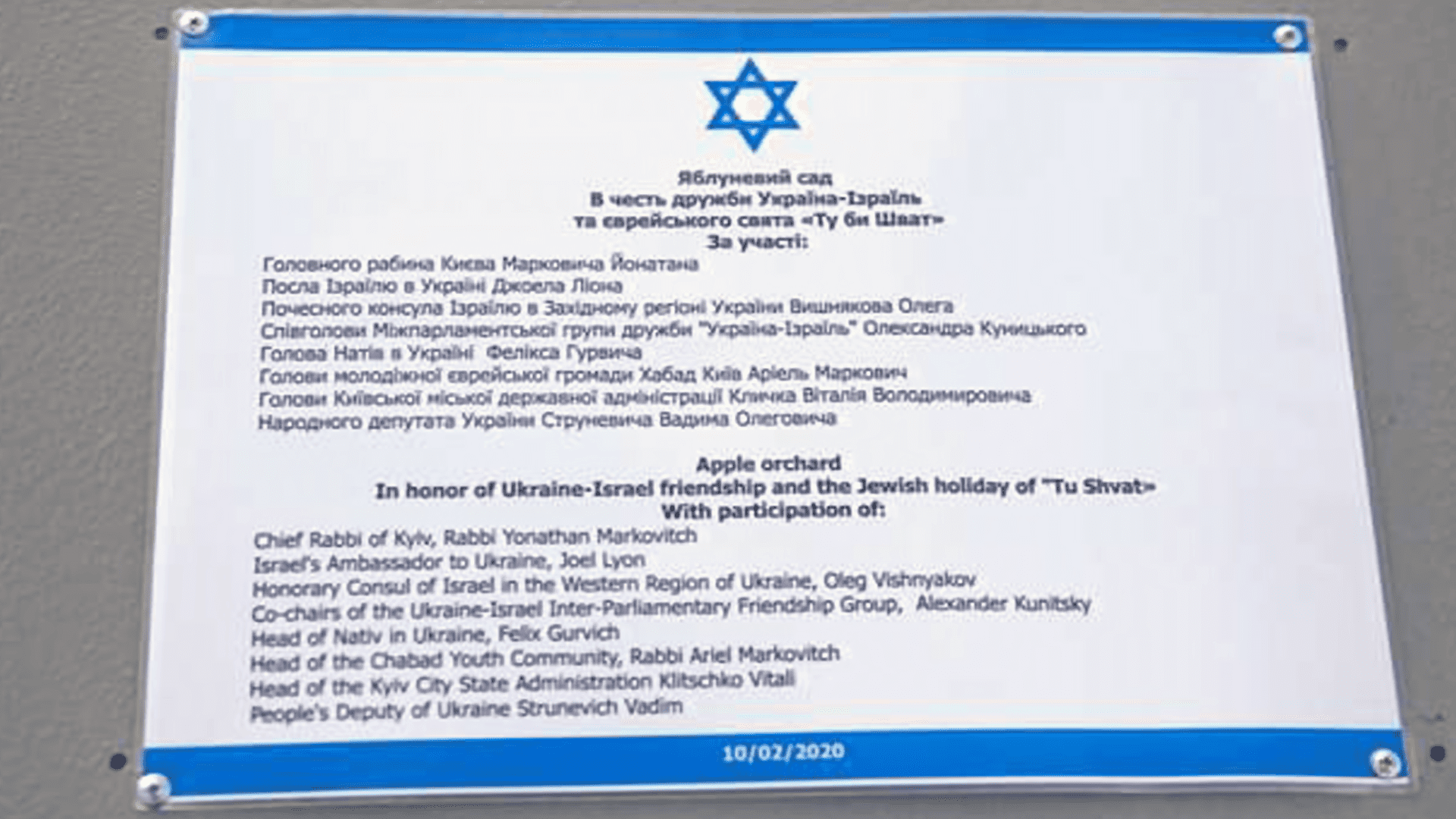 Ukraine Has Long Been A Center Of Jewish Life, And Still Is

Ukrainian Jewish history begins over a thousand years ago, dating back to the nation of Kievan Rus. The Jewish community there traces its roots to the Khazarian Khaganate, so members of the contemporary community still consider themselves heirs to that heritage.

Jews in Rus (modern day Ukraine) are first mentioned in official records in 1030, during the reign of Prince Yaroslav I the Wise. One of the ancient city’s three gates was called the Zidovski (Jewish) Gate. The first mention of Kyiv outside of Rus are found in the Hebrew writings of the Cairo Geniza ( a collection of ancient Jewish manuscripts found in a storeroom of the Ben Ezra Synagogue in Old Cairo, Egypt).

Over the next several centuries, the Jewish community in Rus grew, eventually comprising about 5% of the worldwide Jewish population. During this period the area, the western most part of Austria-Hungary, was called Halychyna (Galicia) and Bukovyna. In the second part of the 14th century, these Jews became subjects of the Polish kings and magnates as borders shifted.

After 1492, a significant part of the region’s Jewish population were those expelled from Spain (Sephardic), joining earlier Jews of Germanic origin (Ashkenazi). The Sephardim traveled to France, through the Baltic regions, and finally to the Ukrainian territories. During this period of the Polish–Lithuanian Commonwealth, the Jewish community in the Ukraine region became one of the major hubs of Jewish population globally, and one of the centers of Jewish civilization.

After the Khmelnitsky uprising (1648–49), and for the following nine years, an army of Cossacks and Crimean Tartars massacred or captured Jews and Catholics. Estimates range from fifteen to thirty thousand Jews killed or taken captive, and 300 Jewish communities destroyed. The Cossack uprising left a deep and lasting impression on Jewish social and spiritual life.

During this time of mysticism and formal rabbinics, Israel Ben Eliezer, known as the Baal Shem Tov – “BeShT” – taught. The founder of Hasidism stressed the importance of each Jew and the importance of individual prayer. His disciples taught and encouraged a new, fervent form of Judaism. Hasidism had a profound impact on the Jews of Eastern Europe and greatly influenced the rise of Haredi (strictly Orthodox) Judaism, with a continuing influence through more than 200 dynasties, some of which continue today.

Large populations of Jews came under the dominance of the Russian Empire following the partition of Poland. Catherine the Great established the Pale of Settlement comprising parts of eastern Poland and the Crimea. With few exceptions, Jews could live only in these areas. Only the very talented, wealthy, or prominent could travel outside the Pale.

The most prosperous spot in the Pale of Settlement was the port city of Odessa, a “new” city with access to the Black Sea. Odessa attracted Jews from throughout the region – and rising antisemitism.

By 1897 Jews comprised some 37-45% of Odessa’s population. Despite – or perhaps because of – this strong presence, anti-Semitism and violence directed at Jews took hold, prompting mass immigration. A wave of pogroms from 1881 through 1884, Tzar Alexander III’s anti-Semitic May Laws of 1882, and government-sanctioned anti-Jewish riots all compelled more than two million Jews to flee Russia between 1881 and 1920.

Millions left the Pale. Many of those leaving went west – most to the United States. Others chose east – to Israel. On July 6, 1882, fourteen university students from Kharkov, led by Israel Belkind, became the first group of Bilu pioneers to arrive in Ottoman-ruled Palestine. They, and the mostly Russian Jewish pioneers who followed, joined Hovevei Zion and established Rishon Le Zion city (First in the Zion), Hadera, and some 20 other settlements.

In 1890, the Russian government approved the establishment of the “Society for the Support of Jewish Farmers and Artisans in Syria and Palestine.” Based in Odessa, the organization, headed by Leon Pinsker, was dedicated to establishing Jewish agricultural settlements in Palestine. By 1897, it had 4,000 members. In Israel, led by Meir Dizyngoff, it raised money to buy land for the future Tel Aviv and Hebrew University in Jerusalem. Tel Aviv was designed according to Odessa styles and maps.

In 1941, prior to World War II, 2.7 million Jews lived in the Ukraine. It is estimated that more then one million were murdered in the “Holocaust by Bullet,” killed by the Einsatzgruppen, the Nazi paramilitary death squads, in collaboration with locals throughout the Ukraine. Others were killed in the camps. 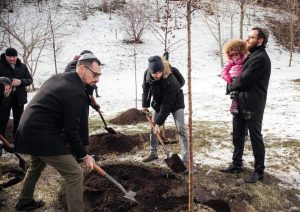 In 1989, Ukraine’s Jewish population was slightly more than half of what it had been thirty years earlier. Many of the Jews who remained in the region moved to other countries – including to Israel in the 1990s during and after the collapse of Soviet Communism. During the 1990s, some 266,300 Ukrainian Jews emigrated to Israel. Assimilation also contributed to reduced numbers.

Despite significant population decreases, as of 2012, Ukraine had the fifth-largest Jewish community in Europe and the twelfth-largest Jewish community in the world. Its newest institution, the multi-functional Menorah Center in Dnipro, opened in October 2012. The European Jewish Congress estimates the 2014 Ukrainian Jewish population at between 360,000–400,000. Jews remained in the Ukraine.

Thousands of Kyiv citizens attracted to Jewish values participate in the life of the community, and expat Jews living or staying in Kiev are actively involved in events.

Jews in Kyiv can lead an active Jewish lifestyle: observe traditions, pray, have access to kosher food, celebrate Shabbat and holidays, and participate in lifestyle rituals including Brit Milah, Bar and Bat Mitzvot, and weddings.

Chief Rabbi Markovitch and his wife, Rebbetsen Inna Markovitch, are frequently spotlighted in Ukrainian media and maintain close contacts with the leadership of Ukraine and representatives of the diplomatic corps. The Rabbi has received Ukraine’s Presidential Medal for his service to the country, and has helped secure official recognition of some Jewish Holidays. Their son, Rabbi Ariel Gershon Markovitch, works with Ukrainian Jewish youth, helping them understand traditions, and assisting in career development possibilities. 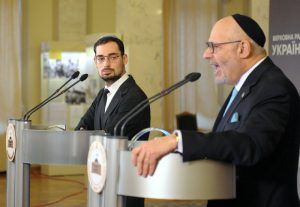 Jews in the Ukraine are notable in politics and business. Unofficial sources report that 20% of the 100 richest people in the Ukraine are Jewish. In 2012, Ukrainian Jewish businessman and politician Vadim Rabinovitch helped finance the reconstruction of the Hurva Synagogue in Jerusalem’s Old City, and presented the Jerusalem municipality with a 3 million dollar replica of the Temple menorah stolen during the Roman conquest.

In 2019, Ukraine was the first country in Europe where both its President and Prime Minister were Jewish. Since the election of President Volodymyr Zelensky, a Jew, relations between Israel and the Ukraine seem to be improving. In 2020, for the first time, the Kyiv Jewish community formally commemorated the victims of the Holocaust in a ceremony attended by members of the Ukrainian Parliament, and the Ambassador of the state of Israel, Joël Lion.

In 2020, an apple orchard was planted in Mariinsky Park across from the Supreme Council of Ukraine, its parliament, during Tu Bishvat celebration. TJV’s correspondent in Ukraine, Leonid Barats, notes that he “was honored to take part in the organization of this event and actually plant trees, leaving my personal trace and impact on such an important memorial. Ukraine holds a massive place in history as the birthplace of both Hasidism and Zionism.” Chief Rabbi Markovitch, Israeli Ambassador Lion, and members of the Ukrainian Parliament participated.

For now, commented Barats, “the level of antisemitism is less than since before the independence of Ukraine. We are looking forward to cooperating with Israel in fighting viruses, to feed the world together, and to defeat hunger! Of course Corona puts a lot of mess in our plans –  Ukrainian income derives in part from IT partnerships with Israeli companies and Israeli tourism for pilgrimage and vacations. As a spokesperson for the Kyiv Jewish community, I personally promise to do my best to enlarge awareness of the fabulous story of our people, make known our traditions, and further reduce antisemitic incidents. People hate what they fear and are fearful of what is unknown.”

Barats stresses that “fighting the stereotype that Ukraine is an antisemitic country is an important mission…becuase, Baruch Hashem, it’s not. I am freely walking around the city in kippah with tzitzit, same as Rabbi, same as many other Jews.” 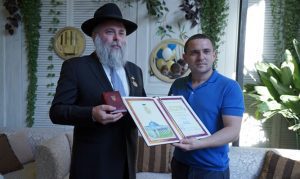 A social advertising campaign for the Kyiv Jewish communities is underway. Ads have been placed on screens at bus and metro stations and on main roads. “Hard to imagine this under the Czar or during the Soviet era,” marveled Barats. Ukraine, he notes, “is a real friend, maybe even a brother, of Israel. Many Ukrainians are trying to find their Jewish roots. We were worried at the election of President Zelensky, though a secular Jew, would lead to an increase in antisemitism based only on typical resentment of the government. Thankfully that hasn’t happened.”

The COVID pandemic derailed many community plans, like for every group everywhere. Many Ukrainians’ incomes are tied to partnerships with companies involved with tourism for Israelis, both religious and vacations, so there are needs to be addressed by the government, communal groups, and among neighbors.

No report on Jews in Ukraine would be complete without a mention of Reb Nachman of Breslov and the annual pilgrimage many Hasidim take to his grave in Uman in the center of the country. In response to the Covid 19 pandemic, Ukraine shut its borders, stranding hundreds. The incident “has given rise to some antisemitic hate speech in social media,” noted Barats. “People were asking a type of ‘justice’ question: on Easter, Ukrainians were quarantined at home; Christians were without the possibility of going to church because of spring lockdowns while Hassids were demanding entry.”

Adding to the work of local activists and educators in Ukraine’s Jewish community is the hard-to-explain dynamic of some Hasidim not being Zionists. “How can we explain this to the local people?,” Bratas asked, “when some pilgrims carry posters saying ‘We love Ukraine, we hate Zionism and Israel’”.

“The future of the Ukrainian community and its Jewish millennials is very hard to predict,” suggested Barats. “What I can say is that they are much more into left and liberal values. They are thinking about equality – that there should be equality between Israeli Jews and Israeli Arabs; that in Ukraine, we need to cooperate with different ethnic groups…Maybe the future of Jewish community here is to be even more open, hopefully without too much assimilation. Yes, we are Ukrainian Jews. Yes, we live here. Ukranian Jews have an amazing story and impact for all the Jewish world, especially for Israel.”

“We are Jewish, first of all,” he concluded.